What is really aiki? I mean we do it all the time, or rather; we try to do it all the time, but If we are asked to define it, I find it very difficult to describe in words. It is easier to say what it’s not, and by elimination, what is left in the end is aiki.

However, I have tried writing a post about what it is not, and I too easily become obsessed about writing about ways to practice which I don’t like, and start criticising others for their ways. That is not really something I think is useful for my development, and it is wrong, so I will still try to put some words to what it is. Now I have a concrete, good example, of what I think aiki is, so it is a bit easier to write about.

Visit from Prague during the seminar with Endo sensei in Stockholm in February 2015. Photo by Theodora Wolfe.

I was attending a children class about a month ago where I had one of my biggest discoveries lately in aikido. There were two beginners, about ten or twelve years old or so. Beginners hold the key many times, to be able to move on to the next level. Because they don’t have the movement patterns which are imprinted from the practice. They still move like a non aikidokas, and do not fill in the blanks when I make a mistake. They are afraid to fall, or loose (which is how most normal human beings consider falling down) which is completely natural so it makes the requirements for things to go smoothly much more high than with experienced people. In addition they are children, so they do pretty much as the want, all the time.

The exercise we did, which gave me my big experience of discovery was a yokomen uchi exercise, where we meet the yokomen uchi and directly takes the partner down, without making any movements. The two beginners did not even know how to properly make a “correct strike”. One time I remember even having to move forward to reach the already relaxed, soft and quite disconnected (from the centre) arm to start my work as tori. I mean, there is of course always the possibility as a more advanced student, or a instructor, to say that “you attacked me wrong”. However, THIS is my development zone. I have to take care of this, right now! 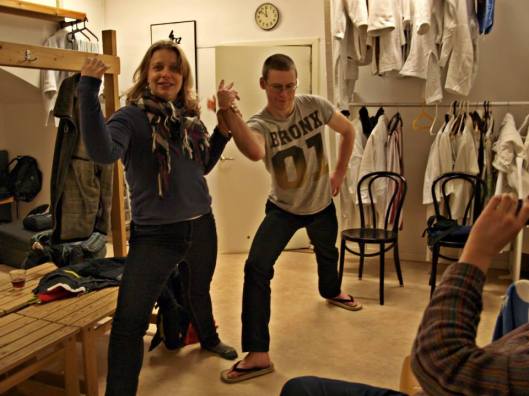 Tai no tenkan posture thing with Jirina at Vanadis Aikidoklubb during the seminar with Endo sensei in Stockholm in February 2015. Photo by Theodora Wolfe.

If I tried to break the balance of the partner he always tried to step with the legs to naturally regain his balance. Any push would cause a counter push, any pull would create a counter pull. The weight difference between us made it very clear to me that any pushing, pulling or twisting by physical force would be be totally unacceptable. I would of course be able to wrestle this partner to the ground, but that would be a very different road than what I am on. Furthermore, this is a beginner, and a child, so atemi is completely unacceptable. If the partner does not react, which he would not, I would have both done something ethically wrong, and still not solved the problem at hand.

Breaking the balance in itself could also be considered as ethically wrong, or an attack on the partner in fact. A counter attack yes, but an attack nevertheless (which would result in an eternal counter loop where we are constantly trying to avoid and counter each other’s techniques). The only way I found, was the one my teacher have told me about so many times before (usually during long road trips to his seminars), but I never saw it as clearly as right at that moment. I have to not break the balance of the partner, but rather give him a new balance.

From holding on to my partner’s arm I made a movement on myself, not really physically, but rather in my mind, of arching backwards with my back. I remember clearly the lovely feeling of this from so many times before when I am the one falling. Immediately the reaction came from my partner breaking a big grin from ear to ear. I supported him all the way down. The same happened to the other child beginner. They were standing in full balance, but still arching back, bending the knees and coming down comfortably, in balance!

Tai no tenkan selfie at a café in Old Town by Theo during the seminar with Endo sensei in Stockholm in February 2015.

I believe that aiki is some kind of unification between the partners. It is no longer you and me, but only us. We are the same body, I am you, and you are me. It is no longer about winning or losing as we are the same body. We do not want to break the balance of ourselves, or strike ourself on a different part of “our body”, or do something uncomfortable or evil to ourselves. We do not want to “trick ourselves”, by making part of us take the long way around and make it “being late” and therefore create the opportunity for a throw. What is left is what I believe we do to proceed in the movement of our kata, if we are interested in doing aiki.

This unification is an extremely important therapy for me. As I recently found out that I hate myself, and I have for years. Things have happened in my past, resulting in a very destructive self image, causing me to think about myself in a destructive way. There is no easy way to solve this, even now that I am aware of it. I can’t just stop thinking. However, when my partner holds on to me, or I hold on to my partner we become one. I do not hate my partner, I love my partners (they make life worth living)! It becomes like a yin and yang thing for me. Within this one body, there is love and hate mixed into a unity where there is no love or hate, it just is, us.

Tai no tenkan in the metro with Andrea during the seminar with Endo sensei in Stockholm in February 2015. Photo by Theodora Wolfe.

1 thought on “Love and hate”