Aikido makes people happy. However there are some cases where the effect is reversed. I do not get angry often on the tatami, but sometimes it happens. In fact it did happen once this summer.

I kind of had an obligation to practice with somebody, and even though I knew it would be somewhat unpleasant, I felt that I should. This person is very eager to point out mistakes I do with what I find a quite unfriendly energy. I have also heard many of my other friends having had the same experience with this person. So the starting point was not very promising. In addition this person had some serious injuries at the time, so the situation was even more difficult than what it normally is. Adding to this I was kind of in a unstable emotional state in the period when it happened.

The final thing was that I was going to practice with one of my very good friends, when this person “jumped me”, so I was unprepared, and quite annoyed that I missed my chance to do something fun with my good friend.

The problems started immediately. I did not want to get dragged into a competition, so I let my partner throw me, even though I could not throw whenever it was my turn. After a few rounds I could not do anything when it was my turn, so I tried to change the roles, so that I could at least have the falling and get something out of the practice. However, my partner did not accept that. The talking started.

I have lots of problems in my body, and in my mind which I am working on during the keiko. I have accepted it, and it does not bother me much. But when somebody starts pointing it out during the practice, as if it were something I could repair by will, I usually get annoyed. The way my partner held on, but at the same time let go every time I sent a message, staring at me with those dead eyes. Without saying a word saying “You can’t do it, can you?”. Well, then it was over, for me. I have the same question, of course. How can we do when the partner is holding like that? But I would never ask somebody that question, except right then. I was furious, so I held up the mirror.

I held on, I stared at my partner with the same dead gaze as I had gotten. I let go inside every time something came my way. I only protected and did nothing more. It took 15 seconds and it was a disaster. My partner were crying, not only then but after the class as well.

How did it go so wrong? How did I get angry, and how could I have avoided it? Why could I not see that my partner acted out of fear, and not really meant to be evil? 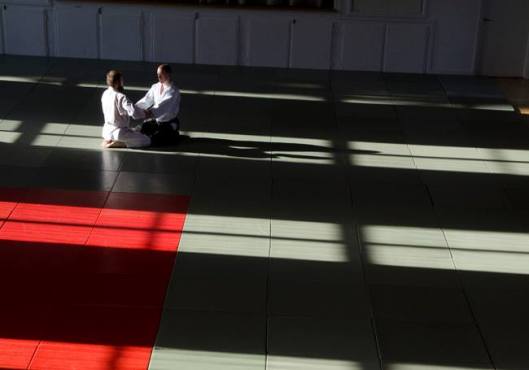 Post keiko with Andrea at Lillsved in July 2015. Photo by Katarina Gullberg.

The same thing happened to me a few weeks ago. This was, just as the other time, a very, very experienced aikidoka. This time it were different though. I did not let my partner throw me to build up a rage inside of me. Immediately when it was my turn. I did the same back. However, this time I did it with a positive energy. The most critical detail which made such a difference, I think is that this time I could really feel, already before I did it, that this person likes to practice like this. Really likes it, and not only pretends to like it, because of some image in the head that it is not for real unless we resist each other. The result was the same. I could not do on my partner, and my partner could not do on me. Because it is impossible, or maybe only almost impossible.

Also, this time I came to the difficult partner when I was prepared for a challenge. I had my previous failure from this summer in mind, and I had a plan. I was not mentally unstable at the time, and I did not really want to practice with somebody else.

I was taught in the training program for a job in telephone support that 90 % of what we say comes from the body language, while 10 % comes from our speech. If we divide up the speech also 85 % comes from the use of our voice, and only 15 % comes from the actual words we choose. So how we act and how we use our voice is extremely important when communicating with somebody. Instead of saying no we should give an alternative solution. Words with negative associations should be avoided completely. I think a lot of this comes into play on the tatami. We can choose very much what kind of energy we want to give our partner.

I alway try to attack my partner with a positive energy. My shomen uchi is aimed for my partner’s belly, and in my mind I am splitting my partner in two already before I hit. However, I do it with the feeling of a hug, and if my partner is not responding, I would stop before I touch the partner’s forehead. The partner should become happy from my attack. I does not matter which attack it is; a grab, a strike or a choke. I want to give my partner a positive energy to work with. 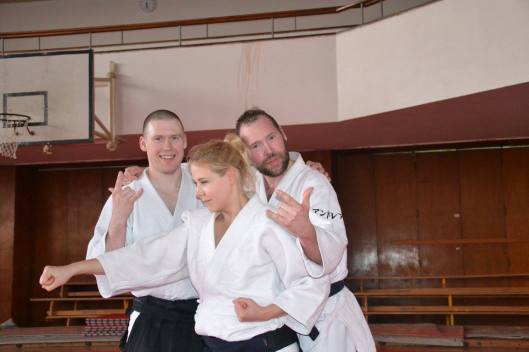 Post keiko fun in Prague with Kristyna and Andrea in April 2015. Photo by Kristyna Biro.

However, all this is turned around if we get angry. Then everything we do are transmitting negative energy. So the question is how we can avoid becoming angry on the tatami. It happened once this year, and it was one time too many.

Some people are harder to like for us than others. It is personal chemistry. It could also come from some experience. I lately discovered that I disliked a person just because he for some strange reason, in my mind he represented a bully from school. Once I realised this my feelings changed completely and now there is no problem. Another person took off with a training partner which I almost never meet wen we were in a group of three. Cheating me of my chance to practice with this person. It was completely unintentional, but I were carrying around grudges for this person until very recently when I realised how this had happened. The more aware we are about our feelings the easier it is to avoid falling to the dark side.

Lately I have had an image of a hand coming out from the dark area inside my torso, and grabbing on to my partner. Whenever this happens I am much more connected than when only I am grabbing. My demons, Slinker and Stinker have to grab as well for me to be fully connected. The hands are dark green. They have a thumb and two other fingers. It is not slimy, but dry on the surface. The whole arm is jelly like, and there are no bones inside. Everything about the hand and arm is elastic and sirupy. Maybe it is the dark side of me? The rest of the body is hidden in the dark. Maybe I will bring all of him out, into the light some day, or even better, turn on the light inside of me?

Enjoy your keiko! Aikido is supposed to make people happy. If it doesn’t we are just not doing it right!

2 thoughts on “The Dark Side”