Yet the lies that Melkor, the mighty and accursed, Morgoth Bauglir,
The Power of Terror and of Hate, sowed in the hearts of Elves and Men
are a seed that does not die and cannot be destroyed;
and ever and anon it sprouts anew,
and will bear dark fruit
even unto the latest days

I have an eternal fascination for conflicts, great and small. The crescendo in the beginning of a conflict is invisible to us if we are part of it, but it is clear as day if we know the participants and observe from the outside what happens. We have the ability to see the problem from the perspective of both parts, and thus it is clear where the collision is happening. For the participants of a conflict the point of impact is invisible to us. Or we would not have had any problem with harmonising with the other and find a mutual beneficial solution.

Pre keiko tai no tenkan with Jorma in Hannover in September 2016. Photo by Andrea Raviglione.

The fruit of these conflicts ends with two people or more who has bad feelings towards each other and maybe even hate each other. Both parts feels that the other was the one violating them, and feels that they themselves did nothing wrong, and very often to the contrary, they feel that they did everything to accommodate the other.

Conflicts are a part of life and our world at every level of our society. The smallest conflicts involving only two people, and the largest involves millions. These conflicts are natural in our world, but the potential for improvement is tremendous, and it would affect all the people of the world.

We are all here on this little rock trying to live our lives. Somehow we tend to separate ourselves from others we feel are different from us, but why are we feeling that they are different?

I have a job where I speak to several hundred people every day. I have conflicts every day, even though I myself don’t even have any personal interest in doing one thing or the other. We are just trying to work out everything to the best interest everybody involved, not really being involved in the process ourselves.

So even if I initially I don’t have any part I will get a part if the person I am talking to is forcing me to repeat myself, and tries to convince me into doing what I am not supposed to be doing. I feel violated, because I don’t like people telling me what to do, when I know very well what I am supposed to do. My positiveness (which is the very thing I strive my best to keep at all times) can also get me into a lot of trouble, as some people are so negative that they are offended by any positive energy. I am studying these things. Still, I can’t avoid not getting along with a percent of the people I meet. Are they enemies? No, I think not. At least not when I have had my keiko and are looking back at the situation.

Friends on the tatami in Hannover in September 2016. Photo by Tom Dijkman.

Some people are stuck in situations that are impossible for any of us, and have to deal with negative people around them every day. The negativity spreads and they walk around spreading the poison to everybody they speak to. Every time there is a problem they focus on the problem instead of looking at what the possible solution could be. I think it could be like this, because this is what happens to me when I get into a conflict. I can’t see anything except the problem, which is the other person, from my point of view at the time, and the solution is not even interesting for me then and there.

On the tatami these conflicts are usually smaller, and therefore easier to study, even if we are part of them. The grab is a symbol of a conflict: one is holding while the other is moving.

However, if we get to the point where we think the other is the problem, the enemy, the solution is no longer within our grasp. We will merely be trying to defeat the other. This does not solve the problem we had, of course, because the problem remains and our next partner to touch that part will show us the same symptoms. How many times do we need to experience this before we dare to accept that the enemy is inside ourselves? The enemy is the part of us who tells us that the other guy is the enemy, because our partner is our only ally to help defeat the enemy within.

In real life everything is more difficult, but I believe it works the same way. Our expanded awareness could help us observe what happens when we are feeling these feelings of separation between ourselves and our counterpart. We can’t really control feelings directly, I think. When we feel something we do, and we can’t choose not to feel it. However, if we are aware that we do feel it, and understand the reason why we feel it, the feelings does not catch us in the same way, and we have much better impulse control, and have options to choose from in the moment of truth. Otherwise we would blindly go in the direction of disaster, spinning into a spiral of aggression. The feelings are still there, but they do not bother us like they did before. 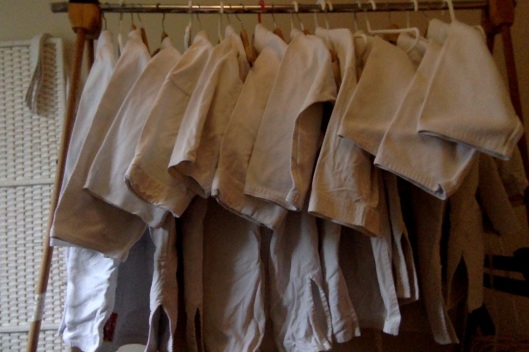 Laundry day in October 2016. They are all different, but they are all the same as well.

I consider aikido a potential cure for mankind. It is unwanted by most, and utterly hard to get into for many, but it contains some hope for peace in the world. Only a few of os do it, and it will always be this way, because it is a very peculiar activity. Trying to sell it never works. There is no way to do business with it. The number of people interested are too low, and it is enough valued  for anybody to exploit it for personal gain. This makes it even more pure and clean as an idea, in my mind.

The usefulness in the world is indescribable. Holding on to each other is a fundamental bonding act. It is so incredibly much more easy to realise that we are on the same side, if we have gotten to that point. Still most people never will, except for with their loved ones.

I strongly believe that there are no “bad guys”. They become who they are because of who we all are. Actually more accurately I should say that I believe that we are all bad guys. Look at the news and read some history. Humans are not really very human, you know. For me a martial arts are not necessarily merely weapons for the people who know more to destroy the people who know less or nothing of it. There is something more to it. We want to solve the conflict and end up making friends with the other. I believe that aikido is a step in the right direction for the world. However, only those of us that believe in it can make the step for ourselves. We can not and should not push anybody else into it, as it would not work, and – well – it is wrong of us to push people around anyway.

Well, that would be my laundry day thoughts this time around. Now it is time to clean the dojo and do some keiko! I wish you all the best! Enjoy your practice! Aikido makes people happy!