Aikido is a great art, and it has many little sub fields within it. One that I am particular interested in is the search for finding how to be able to move with my partners without pushing, pulling nor twisting. The goal is that no physical force whatsoever should be felt, just like when we are moving around our own body parts. I believe that what we physically feel is disharmony, and completely clean movement should be completely natural, and thus cannot be felt by our partner.

During this Christmas we did some suwari waza from many different strong grabs including ushiro waza. The kata, the grab and the integrity of the posture of both partners works as fulcrums in the practice; Restrictions added to make problems visible, so that we can easily work on them.

The kata dictates the physical form of the movements; A goal we are striving to achieve; A restriction in physical movements we are allowing ourselves to make from the beginning to the end. We also practice keeping a fully connected grab (all the surface of the palm glued on to the partner’s body, or keikogi). Striving ceaselessly both as uke and as tori to release any tension and make the grab as effortless and natural as possible, removing any strain from appearing in any parts of the grab. The third fulcrum is the integrity of the partners. Both as uke and tori should be in a nice and straight posture throughout the kata. In any point of time should be be in the best position possible.

The combination of these fulcrums, and the fact that our body is not a bungee cord, makes it a challenge to complete the kata, and in suwari waza ushiro ryote, hiji and kata dori (and so on) it is quite obvious that, mechanically, our katas are impossible.

It is the same in all our katas, actually, but these forms just takes it to the extreme. Instead of requiring a few magic centimetres of space to perform it, we now require a few magic decimetres. However, I believe it is just a matter of experience, deciding wether we can do it, or not. Nothing is impossible, if we believe, and continue to practise. It is only impossible if we stop practising.

Keiko with Andrea in Trondheim in January 2018. Photo by Rachel Cetre.

Sometimes it does not look exactly like the kata we were aiming for, but I think it does not matter. It will look better every week of practice. We are practising, and by doing so we are travelling on our journey. If we stop practising we die, in a way, because our journey ends. However, as long as we practice we will inevitably proceed in our journey.

The practice of this magic skill; the study to make this space appear which is not there initially, is something we are cultivating in our daily keiko through tai no tenkan. This simple kata is one of the first movements we learn in aikido, and it contains the entire art right there. The space required is much smaller than in suwari waza ushiro ryo kata dori, but without the space needed we will feel stuck. If we can make space in tai no tenkan, there is no difference to make it in any kata, right?

We have no choice but to respect the laws of Nature, of course, and there is no way we can really bend space time with our actions in the dojo. Except of course the microscopic changes due to the displacement of the mass of our body and our partner’s body, which will change absolutely nothing in our situation (The General Theory of Relativity). So where should this space come from?

The Orion Nebula. Photo by NASA.

I believe that the main work lies in the use of our minds. Mechanically these movements are impossible, and leverage does not help in this case. If we violate our partner in any way, we have failed just as gravely as if we are physically stopped by the restrictions and find ourselves unable to move. Leverage gives us inhuman strength, but strength is just physical power. It will still be impossible unless we have space for our movements.

Now, when I say impossible, I mean that the kata analysed as a rigid form, there are things which are stopping the movement. The length of our arms and the angle of the grab to the partner’s arms gives a certain amount of space. If we do something which requires more space, something will break. Usually the grab. And if it breaks, we are not following the kata any more, unless of course it happens to be one of those places where we are supposed to disengage the partner’s grab (and that should anyway not be done by merely pulling away by force).

The grab study is great. It gives us a possibility to study these things in a way which gives immediate feedback from our partner. We feel the physical stops; We feel when we are stuck; We can feel where the road is open. In striking attacks the situation is mostly the same, except we have no feedback until we are in physical contact. And by that time most of the interaction should already have happened, so we are unable to correct the early parts. In a grab we can study each point of difficulty as they emerge. 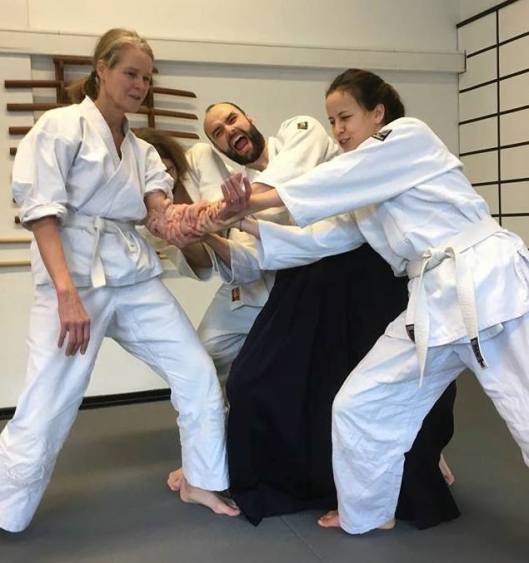 The extra space we acquire by our technique, serves both. Not only one. It is not a technology which serves the strongest, the smartest, the most experienced or the most greedy nor the most skilled. It serves BOTH partners. Without it the kata would be a violent display of power, where one suppresses and dominates the other. With aiki the kata becomes something else. I believe it becomes aikido.

We use images to guide our minds and our bodies to achieve a state in which these “magical” things can happen. It is probably possible to make it happen directly as well, but I think that would require an extreme control and awareness of the mind. I believe that the use of images might bring us far ahead of what we can do at our own level, because certain images naturally sets our mind and body in a corresponding state.

We don’t really have to fully understand how it works. We just think about a certain thing, and something happens to our relation to our partner. Physically we just feel that the problem we had suddenly disappears and we can proceed to the next point.

It does not matter if our partner believe or not. We can still practice. The less they do, the more we have to do. I believe that to study with a like minded partner is most useful, to find these things. But I think that it is possible to practice with anybody. The partner can help us, not help us, or sabotage us in our kata. In any case the kata requires 100 % to be performed, by one of us, externally and internally. The distribution can be anything. Ideally I would say that it is naturally half to each of the partners. Uke should do certain things, and tori should do certain things. These things should always be natural and in their own best interest. It gives the kata some logical sense in a martial way. Still it does not necessarily mean that all partners agree, so we have to adapt to practise with them.

If we have a partner who works against us we need to have the technology to cancel their action. An example could be that the partner pushes us. If we push back we are standing and pushing on each other, one push requiring another to push back. In one way you can say that they are cancelling each other, but that is not what I mean by cancelling. We are pushing each other already before we start, so we have already failed. We need to be able to unpush, by aiki, so that the partner are unable to push. Then we are not forced to push our partner in order to not get pushed back ourselves. This is extremely difficult of course, thus I believe that a like minded partner is better in the early stages of our study.

It does not really matter if we are tori or uke. In both cases, if our partner neglects some part, we need to fill in the missing part or we will get stuck somewhere. If we are uke, and tori pushes, instead of merely pushing back in the opposite direction, we should try to cancel the push of our partner, because it is not good for either of us. I have found that this is an important element when practising with a large collections of different partners so that I can minimise the amount of physical force between my partner and myself.

When we have found the neutral state, we can start our real study in how to make this magical space emerge.

I have mentioned several images which helps us in my earlier posts. The images has been a fundamental constituent of my study for the past decade. Some images works for some people and not for others, and in some situations, but not always. So I find it very useful to have a great collections of these images to chose from, at any given moment.

The new image which emerged the past couple of days was a torrent. I imagine a rotation around a vast void central area. The void at the centre contains infinitely much space, curved into a different dimension, but it is still present with it’s energy. All around this centre, in the spinning mass, there are several other, smaller, torrents, each with their smaller void centres. The smaller torrents also have several smaller void centres and torrents, and so on.

All of this is slowly spinning ceaselessly, and nothing can stop it. All we have to do is imagine this, and do nothing, which of course is the hard part (because our ego wants us to do something), and the magical space will be available for us in the movement with our partners.

The Red Eye of Jupiter. Photo by NASA.

This is not magic, of course, but it appears as magic in the keiko, when it happens after long hours in the dojo, where this has always been a problem standing in our way. Magic has always been the name for things which we at the time could not explain, through all the ages of our world.